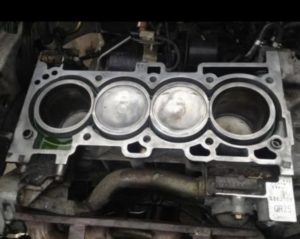 How does a car engine work step by step?

The engine then partially converts the energy from the combustion to work. The engine consists of a fixed cylinder and a moving piston. … After the piston compresses the fuel-air mixture, the spark ignites it, causing combustion. The expansion of the combustion gases pushes the piston during the power stroke.

This Is How Your Car’s Engine Works

This is how the combination of an engine, fuel, and air makes your car move, explained in plain English, in case you’re not an engineer.

For most people, a car is a thing they fill with gas that moves them from point A to point B. But have you ever stopped and thought, How does it actually do that? What makes it move? Unless you have already adopted an electric car as your daily driver, the magic of how comes down to the internal-combustion engine—that thing making noise under the hood. But how does an engine work, exactly?

Specifically, an internal-combustion engine is a heat engine in that it converts energy from the heat of burning gasoline into mechanical work, or torque. That torque is applied to the wheels to make the car move. And unless you are driving an ancient two-stroke Saab (which sounds like an old chain saw and belches oily smoke out its exhaust), your engine works on the same basic principles whether you’re wheeling a Ford or a Ferrari. 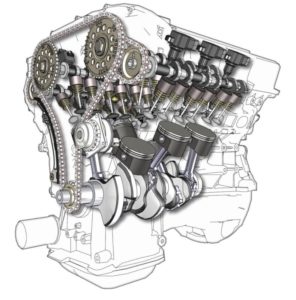 Where Engine Power Comes From

What powers those pistons up and down are thousands of tiny controlled explosions occurring each minute, created by mixing fuel with oxygen and igniting the mixture. Each time the fuel ignites is called the combustion, or power, stroke. The heat and expanding gases from this miniexplosion push the piston down in the cylinder.

Almost all of today’s internal-combustion engines (to keep it simple, we’ll focus on gasoline powerplants here) are of the four-stroke variety. Beyond the combustion stroke, which pushes the piston down from the top of the cylinder, there are three other strokes: intake, compression, and exhaust.

Engines need air (namely oxygen) to burn fuel. During the intake stroke, valves open to allow the piston to act like a syringe as it moves downward, drawing in ambient air through the engine’s intake system. When the piston reaches the bottom of its stroke, the intake valves close, effectively sealing the cylinder for the compression stroke, which is in the opposite direction as the intake stroke. The upward movement of the piston compresses the intake charge.

In today’s most modern engines, gasoline is injected directly into the cylinders near the top of the compression stroke. (Other engines premix the air and fuel during the intake stroke.) In either case, just before the piston reaches the top of its travel, known as top dead center, spark plugs ignite the air and fuel mixture.

The resulting expansion of hot, burning gases pushes the piston in the opposite direction (down) during the combustion stroke. This is the stroke that gets the wheels on your car rolling, just like when you push down on the pedals of a bike. When the combustion stroke reaches bottom dead center, exhaust valves open to allow the combustion gases to get pumped out of the engine (like a syringe expelling air) as the piston comes up again. When the exhaust is expelled—it continues through the car’s exhaust system before exiting the back of the vehicle—the exhaust valves close at top dead center, and the whole process starts over again.

In a multicylinder car engine, the individual cylinders’ cycles are offset from each other and evenly spaced so that the combustion strokes do not occur simultaneously and so that the engine is as balanced and smooth as possible.

But not all engines are created equal. They come in many shapes and sizes. Most automobile engines arrange their cylinders in a straight line, such as an inline-four, or combine two banks of inline cylinders in a vee, as in a V-6 or a V-8. Engines are also classified by their size, or displacement, which is the combined volume of an engine’s cylinders.

The Different Types of Engines

There are of course exceptions and minute differences among the internal-combustion engines on the market. Atkinson-cycle engines, for example, change the valve timing to make a more efficient but less powerful engine. Turbocharging and supercharging, grouped together under the forced-induction options, pump additional air into the engine, which increases the available oxygen and thus the amount of fuel that can be burned—resulting in more power when you want it and more efficiency when you don’t need the power. Diesel engines do all this without spark plugs. But no matter the engine, as long as it’s of the internal-combustion variety, the basics of how it works remain the same. And now you know them.